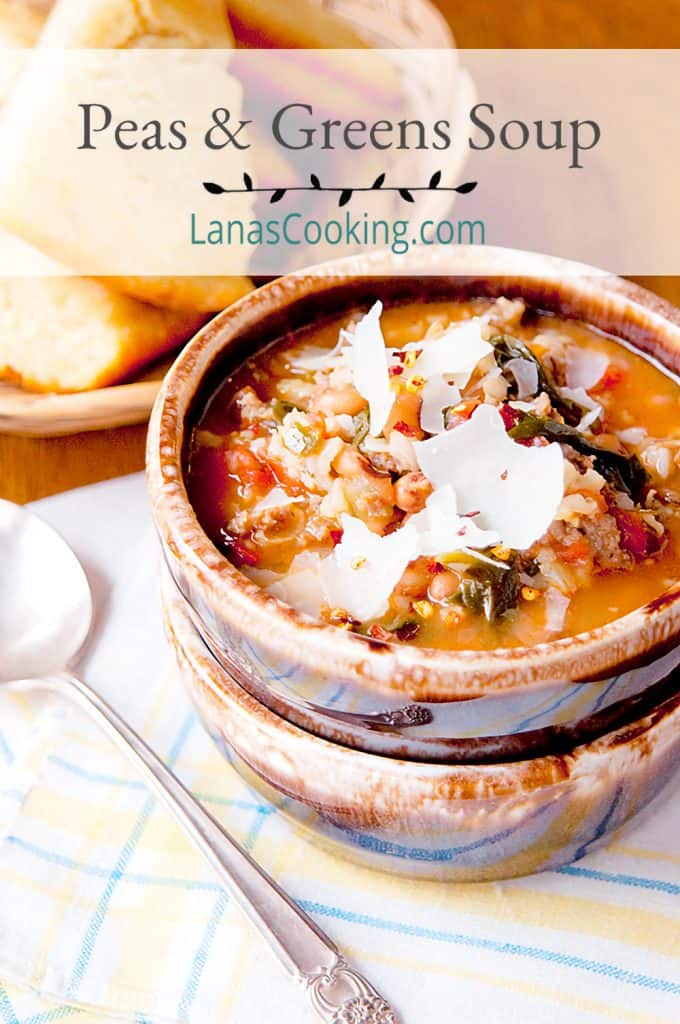 This Peas and Greens Soup recipe combines the classic elements of southern Hoppin' John, rice and blackeyed peas, with sausage and loads of fresh spinach. It'll warm you and nourish your soul at the same time.

Allow me a moment today if you will before I get to the recipe for Peas and Greens Soup. Sometimes I just enjoy rambling a bit :-) And for those of you who simply cannot be bothered to read more than the recipe itself, please avail yourself of the "Jump to Recipe" button you'll find at the top of the post. 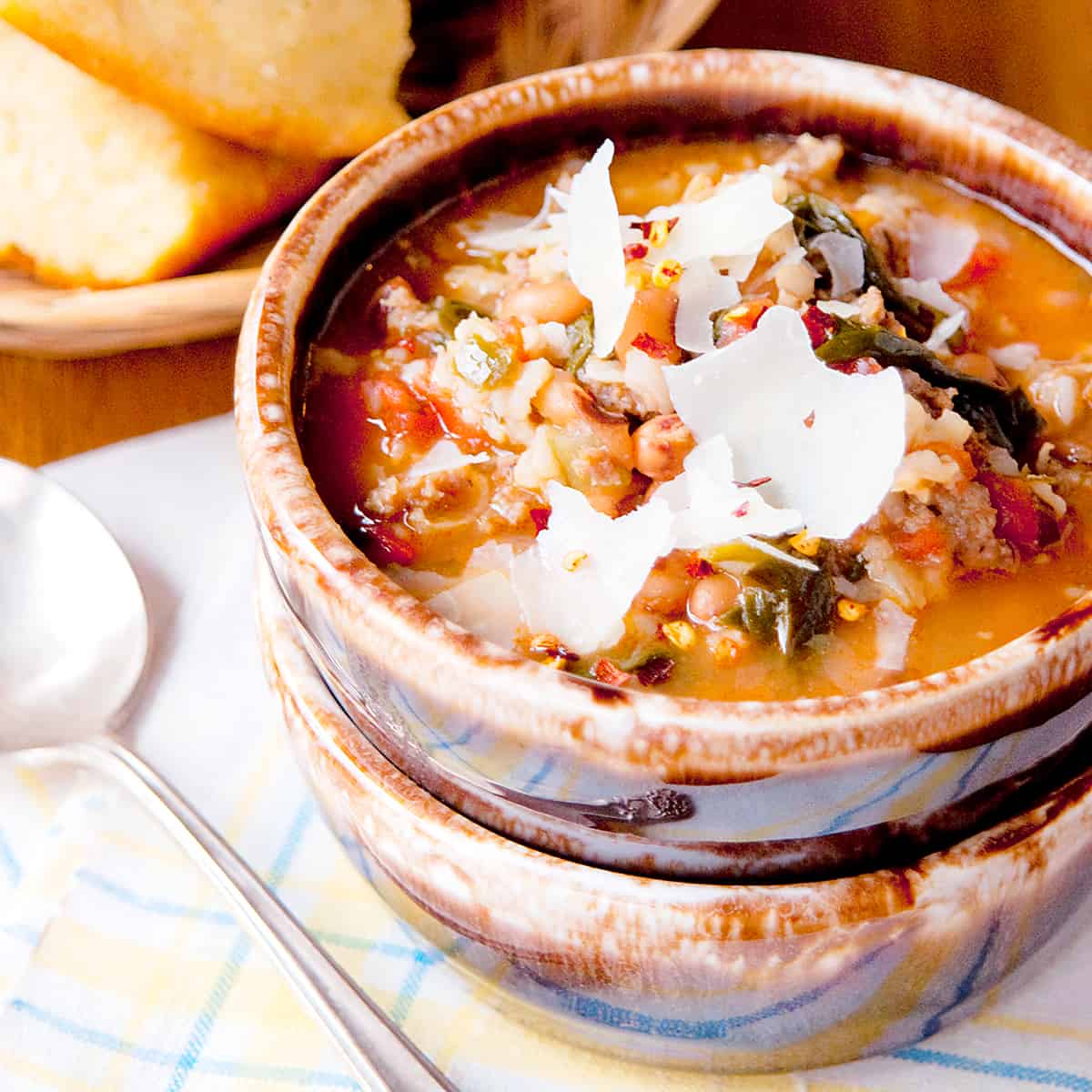 Facebook is such an incredible thing. The brainchild of some wonderfully bright college students, it has grown in a relatively short time into a major social media site on the internet today.

Facebook is great for keeping up with all the comings and goings of your family and friends, but what I like best is the awesome ability it gives to re-connect with people.

I've found lots of my old high school friends, some previous co-workers, and other people I had known and almost forgotten over the years. It's so nice to be able to rekindle friendships and to find out where people are and what they've been doing.

My high school classmates had a little gathering a few years ago in the Spring. Not an actual reunion - that's coming up soon - but just a get-together over dinner at one of the restaurants in my little home town. And the organizers primarily used Facebook to communicate the details to all of us. Of course, not every one of my classmates is on Facebook, but those of us who are really enjoy it as a way to keep in touch.

I've written before about my home town and what a special place it is to those of us who grew up there. That tiny little town tucked away in the southwestern corner of Georgia. Almost in Florida, almost in Alabama, but Georgians to the core.

It's a town so small that when I was a child, there were only two schools - the elementary school and the high school. We went to elementary school through sixth grade and then on to high school for seventh. Each grade in elementary school had only two teachers with about 25 students. And no assistants! The teachers did it all in the classroom. Including making us mind our manners. And you'd better believe that if you misbehaved in school, your mama would know about it before you got home.

My classmates and I, for the most part, went all the way through school together. First grade through graduation.

It was really rare for there to be a new kid in school. Usually the only new kids we ever had were when the town got a new "Georgia Power man" or one of the churches changed pastors. We were a pretty close-knit bunch and many of us have stayed in touch through the years. Lots of us even went on to college together.

However, there were a few who were more adventurous, more inquisitive, more restless than the others. They struck out on their own to explore the wider world.

Some time ago I reconnected with one of my more adventurous classmates, Michael, with the help of Facebook. I'm not sure of all the paths Michael's journey has taken leading him to the place where he is now. I'm just content to have reconnected and to know that another of my childhood friends is leading a happy and fulfilled life.

One New Year's Day, Michael posted on Facebook about a recipe that he and his wife had enjoyed and which, as he said, nourished his Southern roots. With his permission, I took the recipe, added a bit to it and came up with my own version - this Peas and Greens Soup. It's all the best elements of the classic Southern Hoppin' John with a few greens thrown in for good measure. I think you'll really enjoy this one!

How to Make Peas and Greens Soup

Heat a large deep skillet over medium high heat. Crumble a pound of bulk pork sausage with sage into the skillet and cook it until all traces of pink are gone.

Then add a cup of chicken stock, some chopped celery, chopped sweet red pepper, and onion. Stir well, scraping the bottom of the pan to release any cooked on bits.

Reduce the heat, cover the pan, and cook until the vegetables are just crisp-tender.

Meanwhile, in a large soup or stockpot set over medium-high heat, place three cups of chicken stock, the rice mix with its seasoning packet, and the drained blackeyed peas. Bring to a boil.

Add in the sausage and vegetable mixture along with tomatoes, water, salt, black pepper and red pepper flakes. Bring back to the boil, then reduce the heat to low. Cover and simmer for 30 minutes or until the rice is done.

Add the spinach and simmer for an additional 10 minutes. 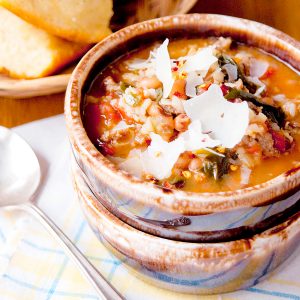 Lana Stuart is the cook, writer, and founder of Never Enough Thyme. Lana has been cooking since she was tall enough to reach the stove and started this blog in 2009 to share her delicious home cooking recipes. You'll find about 700 recipes here so there's sure to be something your family will like!
More About Lana →

Hi! I'm Lana Stuart, the cook, writer, and founder of Never Enough Thyme. I've been cooking since I was tall enough to reach the stove and started this blog in 2009 so I could share my delicious home cooking recipes with all of you. You'll find almost 700 recipes here so there's sure to be something your family will like!
More About Me →