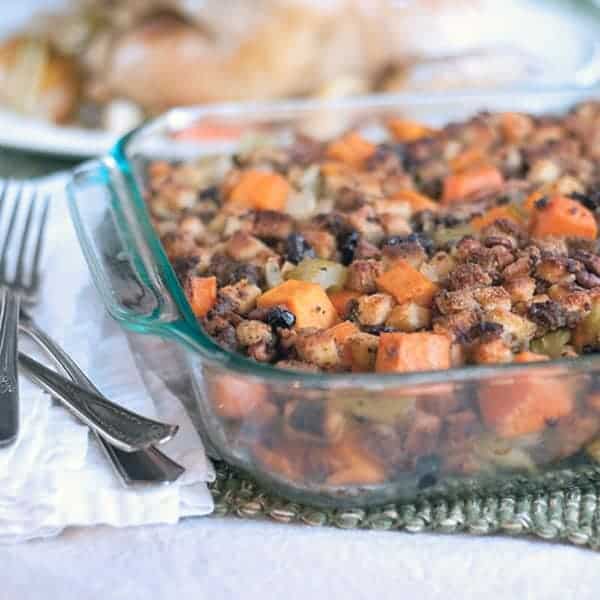 Thanksgiving in most homes just wouldn’t be complete without stuffing would it? I can’t tell you how many times I’ve heard people say that the best part of Thanksgiving dinner is the sides! Of course, our menu will always include Southern Cornbread Dressing which is an entirely different thing from stuffing, but I won’t get into that today :-)

Even though dressing is our tradition, I’m quite interested in all the different stuffing recipes out there. A few years ago on the Never Enough Thyme Facebook page, I asked readers what they like in their stuffing. You should have seen all the responses I got!

That one question got more interaction than anything I’ve ever posted on Facebook. Apparently, people are really passionate about stuffing.

Since so many folks want a good stuffing recipe for Thanksgiving, I decided to create something that uses southern ingredients. This Sweet Potato and Pecan Stuffing is what I came up with.

I included sweet potatoes because they’re a part of most Thanksgiving menus and pecans because Georgia is a leading producer. I hope you enjoy this recipe. It was a lot of fun making it and taste testing it.

How to Make Sweet Potato and Pecan Stuffing

Before we get started, let me just say that you are going to need the largest pots and bowls in your kitchen or either work in batches for this recipe. It makes a lot of stuffing! The skillet that I used is my chicken fryer which is 12″ across and 3″ deep and it was full. 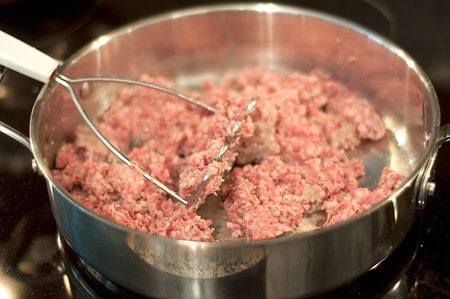 Start by cooking the sausage in your largest skillet or a large pot over medium heat until no pink color remains. I like to break mine up with a potato masher while it’s cooking so that I don’t get little clumps of sausage.

Use a slotted spoon to remove the cooked sausage to a paper towel-lined plate. Set aside. Discard the fat left in the pan and return it to the heat. 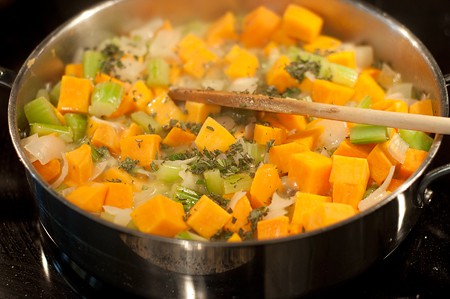 Add the butter to the skillet or pot over medium-high heat. When the butter has melted, add the sweet potatoes, onions, celery, sage, half the salt, and half the pepper. Sauté, stirring frequently, until the onions are soft but don’t let them brown. 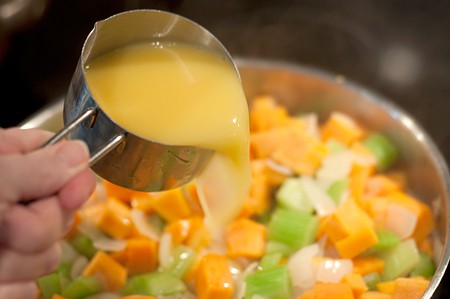 Now add the orange juice and bring it to a boil. Reduce the heat a bit and cook until the sweet potatoes are nearly tender. 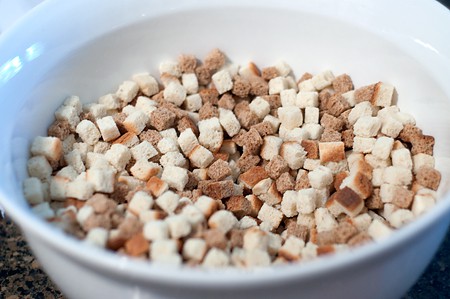 Combine with the Bread Cubes

Pour the package of unseasoned cubed stuffing into a very large mixing bowl.

(Hint: mixing the stuffing is easiest with your hands. Just take your rings off and get in there!)

Season with the remaining salt and pepper. Taste and add more seasoning if you think the mixture needs it.

When you’re ready to bake the stuffing, preheat your oven to 350 degrees. Heavily butter a 15×10 glass baking dish. (That’s a really large casserole dish. If you don’t have one that large, just use two or more smaller ones.) 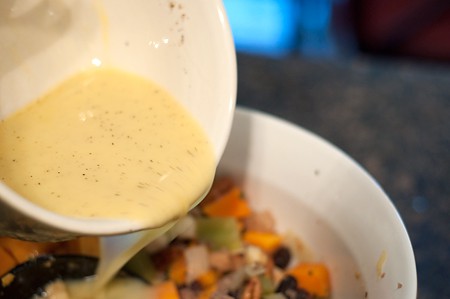 Beat together the eggs and chicken broth in a small bowl. Pour the egg mixture over the stuffing mixture and toss to combine. 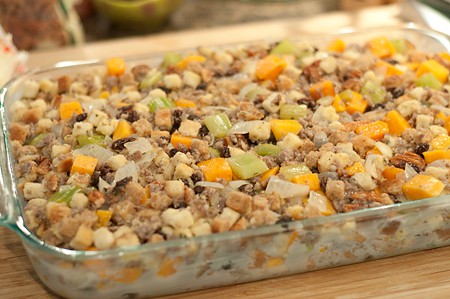 Transfer the stuffing to the prepared baking dish. Bake until the top is lightly browned and crisp around the edges (about 50 minutes). Cool slightly before serving.

TO DO AHEAD: You can saute the veggies up to two days ahead of time and store them, covered, in the refrigerator. A few hours before you’re ready to bake the stuffing, remove the veggies from the fridge and let them come to room temperature. Proceed with mixing and baking the stuffing.

All text and photographs on Never Enough Thyme are copyright protected. Please do not use any material from this site without obtaining prior permission. If you'd like to post this recipe on your site, please create your own original photographs and either re-write the recipe in your own words or link to this post.

Get the latest delicious goodness straight to your inbox!

Stay up to date

Get the latest delicious goodness straight to your inbox!

I’m Lana Stuart, the cook, photographer, author and occasional traveler here at Never Enough Thyme. I truly appreciate every person who visits and am so pleased when one of my recipes works out well for you! Read More…